Skip to main content Skip to footer
Link Copied!
Home > Project management > Everything you need to know about task dependencies

Everything you need to know about task dependencies

All of us at monday.com| 7 min read|
Link Copied!

Projects rarely make up two simple tasks; they usually require many small actions, each with their own task dependencies. Add up all those tasks and you’ve likely got a pretty long list. How do you even begin to prioritize a mile-long list of tasks and to-dos? It can feel like a daunting process, but we’re here to help!

In this article, we will answer some common questions related to task dependencies and how to handle them by using project management software like monday.com. Let’s start with the most important question.

What are task dependencies?

A task dependency represents the order you should complete the tasks for an optimal project outcome.

Put another way: a task dependency is where a task relies on other tasks to be completed before it can be performed. Task dependencies help teams decide how to approach the project and gives them a structure for completing the project in the shortest amount of time. There are four types of dependencies. Let’s dive into what those are.

What are the 4 task dependency types?

Though the above are some of the most common relationships, there are other ways tasks relate to each other.

What are the 4 other task dependencies? 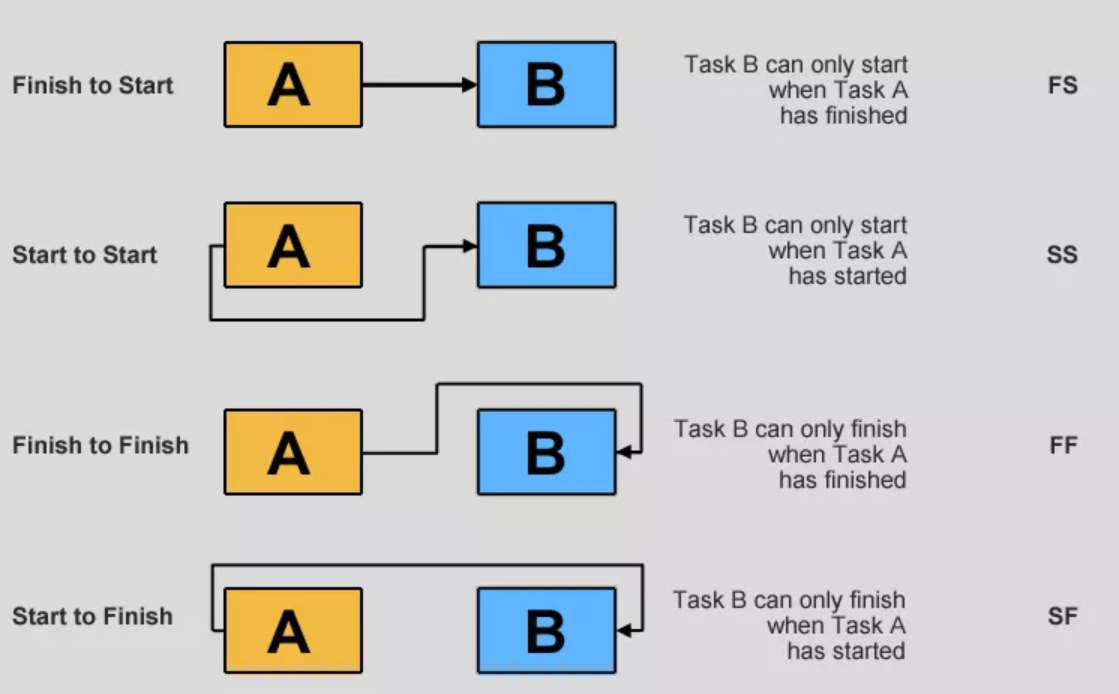 As shown in the photo above, there are four other task dependencies. Let’s break them each down.

Now that we’ve identified all these task dependencies, why is it important we familiarize ourselves with them? Do they really impact a project’s success? Here’s a hint: yes.

Why is it important to identify task dependencies?

We came up with three reasons to identify your project’s dependencies:

1. It can increase the likelihood of on-time project delivery

Mismanagement of task dependency throughout the project timeline contributes to 12% of project failures. Identifying task dependencies is of critical importance for both building and managing the project schedule.

Once a team identifies all of a project’s tasks, they can approximate each task’s duration. After sequencing the tasks according to their dependencies, you’ll be able to see that some sequences are longer than others. The longest string of dependent tasks is called the critical path.

The critical path offers a realistic estimate of project duration and can be useful for managing stakeholder expectations for when a project is actually likely to be delivered.

Below is an example project with its task dependencies on monday.com. We can see the timeline for each task as well as its dependencies.

2. It helps with resource management

Once you know what tasks need to be completed and their estimated duration, allocating resources is much simpler.

Using an integrated platform like the monday.com Work OS, you can easily create alignment between resource tracking and your project schedule. For example, you can even set up an automated email to contractors to confirm availability before work is due to start.

3. It helps with risk identification

Unfortunately, not all project tasks are dependent on things the project team can control. External dependencies can add significant risk to the project schedule.

It’s sometimes frustrating for project managers and team members alike to meet unexpected bottlenecks related to task dependencies, and it can cause timeline and resource challenges.

The best thing to do is flag external dependencies in the project risk register so business stakeholders are aware of any potential impact and can plan around those events.

Luckily, identifying dependencies doesn’t need have to be a complicated process. We know a software that can make the whole process smooth and easy.

How monday.com can help you manage your task dependencies

At monday.com, we are no strangers to the reality of task dependencies, so we built the tools within our platform to help you manage them, too. On monday.com, you can exclusively set finish to start dependencies between different items on the platform.

That way you’ll know immediately when someone finishes a task so you can start the next one. Or, if a task is delayed by two weeks and you didn’t change the status to ‘Done,’ the automation ensures the start date for the next task will also delay by two weeks.

On your board, you can edit task durations to understand the impact on the critical path, adjust resource data, and even set up delay alerts. It’s easy to maintain orderly project plans with monday.com’s intuitive drag-and-drop functionality. The ability to shift things around while maintaining connections between dependent tasks gives you amazing flexibility throughout a project.

You’ll use the Dependent On Column to get started.

monday.com makes it easy for you to organize, plan, and track all tasks in a matter of clicks. Make project planning even easier this year with a robust software.

As you can see, there is a lot to consider when it comes to task dependencies and how to manage them.  A Work OS like monday.com is built to organize and automate your processes, help teams accurately estimate project duration, and ultimately deliver projects on time and in the most efficient way possible.

Play your hand at task dependencies right away with our convenient task management template.

Join the 152K+ customers that use monday.com