The complete guide to picking the best word processing software

All of us at monday.com| 8 min read|
Link Copied!

Since the invention of the typewriter, people have moved away from writing things out by hand in favor of word processing tools.

Nowadays, it’s hard for people or businesses to get work done without an electronic word processor. Tons of options exist, from simple solutions to expansive programs with hundreds of features.

Below, we’ll define in detail what a word processor is and briefly recount the history of this kind of software. Then, we’ll explore the benefits of using an online word processor and take a look at the key features your choice should come with.

What is word processing software?

Word processing software, also called word processors, are any computer programs or devices that let you input, delete, edit, adjust the formatting of, and generally manipulate text and data.

The most prominent example of a word processing program is Microsoft Word. Cloud-based apps like Google Docs are also popular because of their benefits, but we’ll discuss those later.

As mentioned, word processing software forms the bedrock of most modern work and communications today.

Without it, we’d still write by hand or, at best, use a typewriter.

A brief history of the word processor

Before word processing software, we had typewriters, which were considered the first word processors. The first recognizable typewriter was invented in the late 1800s by Christopher Latham Sholes.

Here’s a fun fact: you can trace the lineage of word processors back to these machines — not computer programs.

Throughout the 1960s, companies like IBM innovated by adding electronic features to mechanical typewriters. Then, software came along in the late 1970s and early 1980s — Electric Pencil being the first for home computers.

A basic word processor program called WordStar dominated the market in the 1980s, but several competitors, including Microsoft Word, came along and unseated WordStar.

MS Word eventually became the dominant program, alongside the rest of the Microsoft Office suite, thanks to the growing popularity of Windows OS throughout the 1990s.

Many more innovations came along in the 2000s, such as formatting, spell checking, and even grammar checking features.

But in 2006, the world changed with the first widely popular cloud-based word processing program, Google Docs.

Google created Google Docs after acquiring Upstartle, the creator of cloud-based word processor Writely. At this point, you were no longer limited to your personal computer — you could work on documents from anywhere.

Today, plenty of word processing programs, including Microsoft Word, have moved to the cloud.

Why should I get a cloud-based word processing solution?

Throughout the 2000s, word processing software was generally desktop-based.

Today, cloud-based programs have plenty of benefits over traditional word processor tools. Here’s a look at 4 of the big ones:

Online word processors let you work from anywhere with the proper device and an internet connection. This is vital in the age of remote work.

These cloud-based programs let you write, edit, comment, collaborate, and do other word processing tasks from anywhere — the office, home, your favorite coffee shop, or even the other side of the world.

No need to have a computer, as most word processors offer mobile versions, too.

Traditional word processors only let one person on at a time.

Collaboration in these programs involves tracking lots of changes and constantly sending emails between teammates.

It’s really easy to lose the most updated version of a document in a sea of messages — not to mention the time wasted in sending so many emails and the inbox clutter.

Cloud-based software eliminates this issue because multiple people can be in the same doc at once.

Plus, features like commenting help teams communicate on specific items. 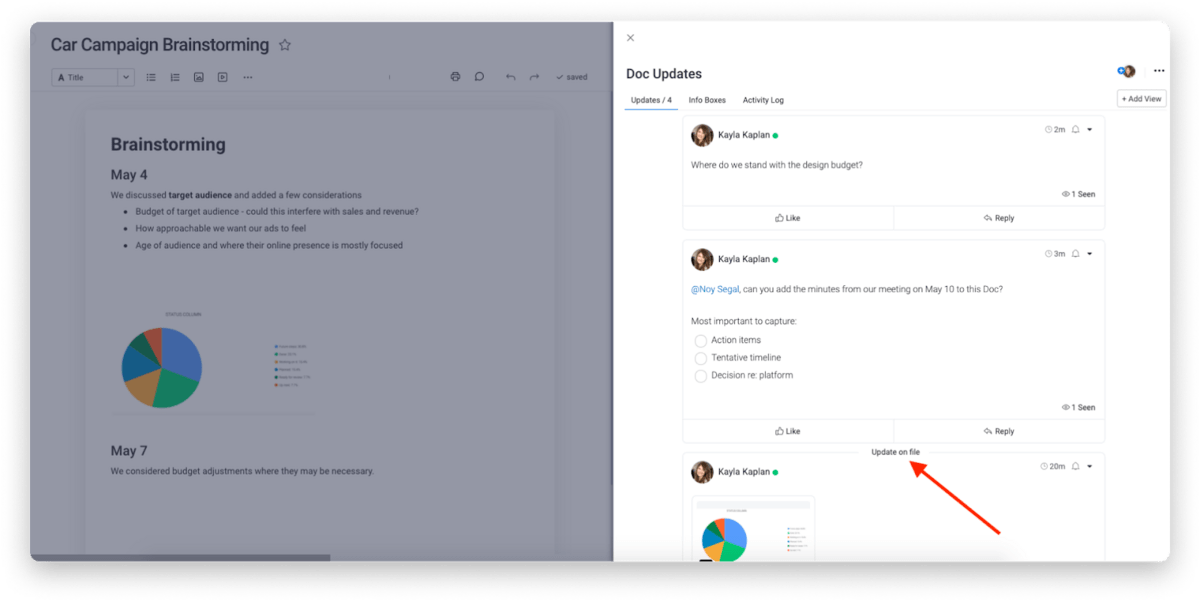 Everyone knows the pain of working on a document for hours just for the computer to freeze and realizing you hadn’t hit save.

Yet, even if you do save, a crashing computer could result in you losing that document.

In the past, you needed to routinely back up your computer or keep copies of documents on USB drives. Of course, it was pretty easy to lose those USB drives and find them later in your washing machine.

These are no longer significant worries with the cloud at your back.

Cloud-based programs store everything, well, in the cloud. No more lost or broken thumb drives.

Many also autosave every time you make a change, so no need to worry about “I forgot to click save.”

Many cloud-based word processing apps are designed with multiple devices and mobile apps in mind.

The companies behind these, therefore, put intuitive UI at the forefront of their efforts during development.

Programs like monday.com’s Docs don’t take too long to figure out, and everything is right where you’d expect it to be. They’re designed to make learning them simple and finding things quick.

Plus, they come with plenty of documentation in case anything confuses you.

What features should I look for in a modern word processor?

Word processing is foundational to your ability to get work done. You shouldn’t take picking one for your organization lightly.

Here are some features to look for:

First and foremost — your app should be excellent at its main job: word processing.

Being able to type words on a page isn’t enough. You should have plenty of formatting and customization options at your fingertips.

Here’s an example of text that someone is customizing the format of in monday.com’s Docs app:

Beyond that, being able to add video and images is key.

In monday.com Docs, you can add and then customize these just like if they were text.

As mentioned before, you need cloud-based software to keep up today.

The entire monday.com platform is cloud-based, so you can use our Docs feature to work on documents wherever you have a device and an internet connection.

But what if you can’t access a computer while out of your office space? You might need to get onto the doc via your mobile phone or tablet.

We thought of that. monday.com has apps for both iOS and Android devices.

Some docs you want visible to your entire organization. For example, company policy documents are best shared with everyone. Others may have sensitive information or are only pertinent for certain individuals or teams, making permissions a vital word processing feature.

For example, if the marketing team is brainstorming an ad campaign, they may not need to share it with the operations team.

Maybe they want sales to have a look, though, but without editing privileges.

For situations like this, you want the ability to control who can view, edit, or comment on your documents.

You also want control over sharing the docs, of course.

monday.com offers 3 types of Docs depending on your needs, and you can always adjust sharing settings.

For example, you can choose between a main, private, or shareable document upon Doc creation.

Speaking of permissions and sharing, your cloud-based word processing app should make collaboration seamless. That includes managing who’s on the doc and the actual collaborative work.

In the monday.com Docs app, you can add teammates to your doc with a few button clicks.

Once all team members you need are in the doc, working on things together is pretty easy.

To illustrate, here’s a brainstorming doc for a proposed marketing campaign that a marketing team is collaborating on in monday.com:

Notice the information in the top right corner. You can monitor who’s been in the doc, add more people as needed, leave comments, and much more.

And, if you have ideas on how to make the app even better, there’s that “Give feedback” button sitting there as well.

The word processor: a vital tool for success

It’s hard to imagine a world without word processors. So much of what we do on and off the internet requires these programs.

That said, the abundance of products can make it hard to choose. You have plenty of standalone options — but it’s even better to get a Work OS that integrates your word processing capabilities alongside the rest of your workflow.

Thanks to monday.com’s new Docs app, that’s entirely possible. It only takes one click to activate, too. Try monday.com free for 14 days to see what it’s all about.